Manufacturing a Controlled Substance in California

Facing drug-related charges of any nature is a distressing experience. Under the California Health and Safety Code Section 11379.6 HSC, it’s illegal to manufacture a controlled substance. Law enforcement agencies and prosecutors often pursue drug possession and sale charges vigorously. They take the manufacturing of controlled substances even more seriously.

It’s best to have a San Jose criminal defense lawyer from Silver Law Firm if you get arrested for manufacturing a controlled substance. Our experienced attorneys are well-versed in federal and California drug crime laws and can mount an aggressive defense against the accusations. Don’t face the charges alone when you can count on our drug crime lawyers to defend your rights and secure the best possible outcome.

What is a Controlled Substance?

Under federal and California laws, a controlled substance is any drug whose production or use is regulated. In California, issues related to drugs are highlighted by the Controlled Substance Act and imposed under the state’s health and safety code.

Generally, drugs are classified into schedules and fall under two categories based on their composition and medicinal properties. Heroin, cocaine, ecstasy, LSD, methamphetamine, and PSP are some common controlled substances in California.

What Does Manufacturing a Controlled Substance Entail?

Elements of the Manufacturing Crime

For you to get convicted under HSC 11379.6, the prosecutors must prove several elements of the crime. In cases involving the manufacture of controlled substances, the prosecution must prove that:

Under the California Health and Safety Code, you don’t necessarily need to complete the manufacturing process to face the charges. You can still get charged if you were involved in the initial or intermediary stages of manufacturing the controlled substance. In this case, the prosecution can still bring charges against you by proving that: 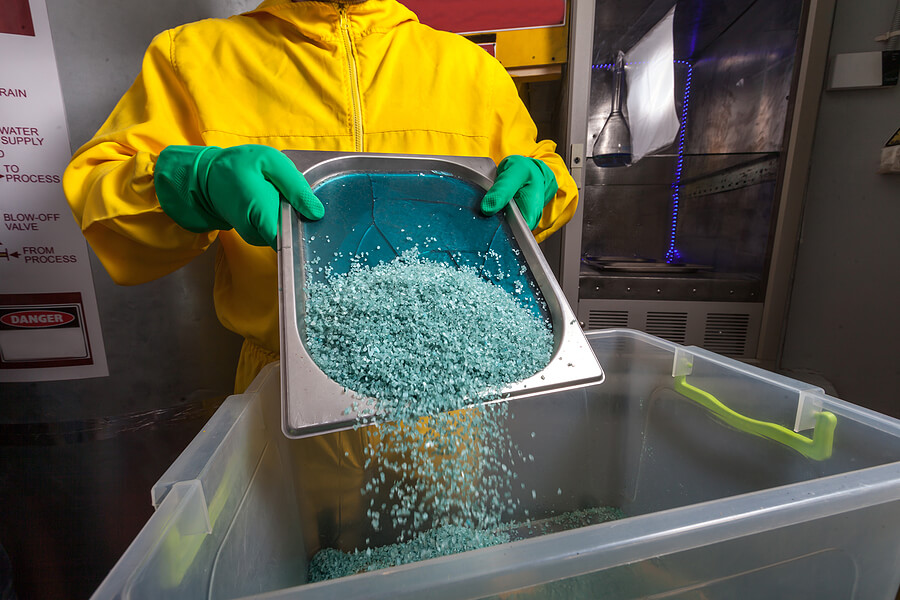 Violating HSC 11379.6 is a felony. A conviction attracts a three, five, or seven-year jail term. The California Health and Safety Code also outlines penalties for merely offering to produce a controlled substance. In this case, you can be sentenced to three, four, or five years in prison.

Thanks to the relatively stringent drug laws in California, the penalties for manufacturing controlled substances are hefty. These four factors can aggravate the potential penalties if you get convicted:

Here’s a look at how these factors can aggravate the penalties for manufacturing controlled substances if you’re found guilty.

A prior drug-related conviction can lead to heftier charges. Those convictions, whether for the manufacture or conspiracy to manufacture drugs, can add up to three years to your prison sentence for every qualifying conviction. That comes into play whether or not the previous charge resulted in a prison sentence.

The prior convictions that can enhance your sentence include:

You’ll serve an extra year in jail for every person that gets injured or dies. Nonetheless, you won’t receive enhanced or additional penalties if the deceased or injured individuals were accomplices during the manufacturing operation.

Manufacturing a Controlled Substance Around Minors

You can face an additional jail term if found guilty of manufacturing methamphetamine near children. You can spend two extra years in state prison if the kids are below 16 years when the violation occurred. The added sentence will run consecutively with the original sentence.

You will be jailed for an additional five years in state prison if a minor below 16 suffers severe bodily injury resulting from the manufacture of a controlled substance. With such hefty penalties looming, the last thing you want is to face the jury alone. Our skilled drug crimes attorneys are there to defend you and fight for a reduction of your charges or an acquittal.

Besides the above-mentioned penalties, further action may be taken if the court finds you guilty of producing a controlled substance in California. Here’s a look at these penalties:

In California, the production of a controlled is among offenses that involve moral turpitude. If you’re a non-citizen, you risk deportation to your country of birth. Deportation also renders you inadmissible back to the United States.

Producing a controlled substance in California is considered an aggravated felony. You can’t have your case expunged if you get convicted. Typically, expungement entails erasing a sentence but doesn’t support crimes punishable by a prison sentence.

Manufacturing a Controlled Substance Vs. Operating a Drug House

Producing controlled substances and operating a drug house are two distinct but related crimes. The latter entails opening or maintaining premises with the intent to sell, give away, or allow other people to use drugs.

Conversely, manufacturing a controlled substance entails the active manufacturing, compounding, converting, producing, deriving, processing, or preparation of a drug. You will get convicted even if the drugs aren’t consumed within the premises.

Drug offenses in California often get prosecuted vigorously. Defending against a well-planned and thoroughly investigated prosecution can be challenging, so you need an experienced San Jose lawyer to mount a robust defense. The legal defenses we can use to counter your charges include:

The American constitution protects you from the illegal search of your premises or seizure of your possessions or person by the government. Whether or not you’re guilty of producing a controlled substance in California, prosecutors can’t use the evidence collected in an illegal search or seizure. Commonly known as the “fruit of the poisonous tree,” California law prohibits the state from leveraging illegally collected evidence by excluding its use of mention during a trial.

The Manufacturing Process Was Preparatory

Although the California Health and Safety Code 11379.6 prohibits the production of controlled substances, it doesn’t prohibit any preparation done before manufacturing. For instance, you can’t get convicted for purchasing or collecting the ingredients used to manufacture controlled substances. The attorneys at Silver Law Firm can also mount a robust defense if you haven’t purchased the necessary components or set up the equipment for producing controlled substances.

When using this defense to fight your charges, we understand the challenges of proving it. Our criminal defense lawyers can distinguish between preparing to produce controlled substances and attempting to do so. Furthermore, you may be guilty of a different crime if you were only possessing the ingredients or precursors that are illegal substances themselves.

In most cases involving controlled substances, investigations and arrests are often made by undercover law enforcement agents. Nevertheless, these undercover cops sometimes lure the accused individuals into committing the crime.

This is known as entrapment and typically happens when law enforcement cops use the following tactics to persuade the accused individual to commit the crime:

We can prove that you committed the offense due to entrapment if any of these acts are involved in your case.

Not everyone accused of producing controlled substances is guilty of the crime. Arguably, this is the most straightforward legal defense that eliminates your criminal liability. We can argue that you didn’t commit any crime by providing testimonies, documents, and any other evidence proving your innocence.

You can also provide an alibi to prove you were not at the crime scene. To support this legal defense, we can include testimonies from other people, phone records, surveillance footage, and other evidence proving your location at the time of the crime.

Elapse of the Statute of Limitations

It takes an aggressive criminal defense lawyer to defend you against charges of manufacturing drugs. At Silver Law Firm, we know too well that California state prosecutors often push for maximum penalties. We have what it takes to take them head-on by crafting a defense strategy that could see your charges reduced or dismissed. If you’re charged related to manufacturing controlled substances in California, contact us today for immediate assistance.